You are here: Home / About Reformed Theology 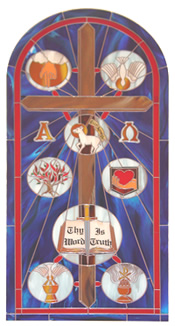 Reformed theology, by definition, is the re-focused understanding of God and His relationship with creation that emerged from the Protestant Reformation.

The beginning of the Reformation period is symbolically marked by Martin Luther nailing his 95 theses to the door of the Wittenberg church on October 31, 1517. This document outlined Luther's grievances with then-current church practices and teachings.

Luther was actually just one man in a long string of men greatly used by God to bring His people back into right relationship with Himself. This line can be traced back at least as far John Wycliffe of the 14th century.

These bold men rallied around the battle cry of Sola Fide - sola Gratia - solo Christo - sola Scriptura - soli Deo gloria to return the focus of the church to God's Truth and the true Gospel. These catch phrases proclaimed that:

Each of these elements refuted lies that had been adopted by the church over the years. Specifically, these truths disclaimed the deification of the Pope, the efficacy of man-centered and church-centered rituals, and the worship of church leaders and other created beings (e.g. Mary and angels). In short, the Reformation returned Christians' focus to the glory of God and His gift of salvation through Jesus Christ.

Over the following years and decades, these men, spurred on by the truth of sola Scriptura, poured into God's Word to more clearly understand the revelations from God. As they learned, and debated, and learned some more, they captured these truths into a series of documents, primarily confessions and creeds, which help all of us to understand and apply these truths to our lives.

Perhaps the most ambitious of these efforts was initiated by the English Parliament in 1643. This gathering of 142 divines became known as the Westminster Assembly. These men met over the years from 1643 to 1647, carefully studying the scriptures, and produced The Westminster Confession of Faith and the Larger and Shorter Catechisms. These documents are the most authoritative summaries of true theology, short of the Bible itself.